What is Theory of Mind? 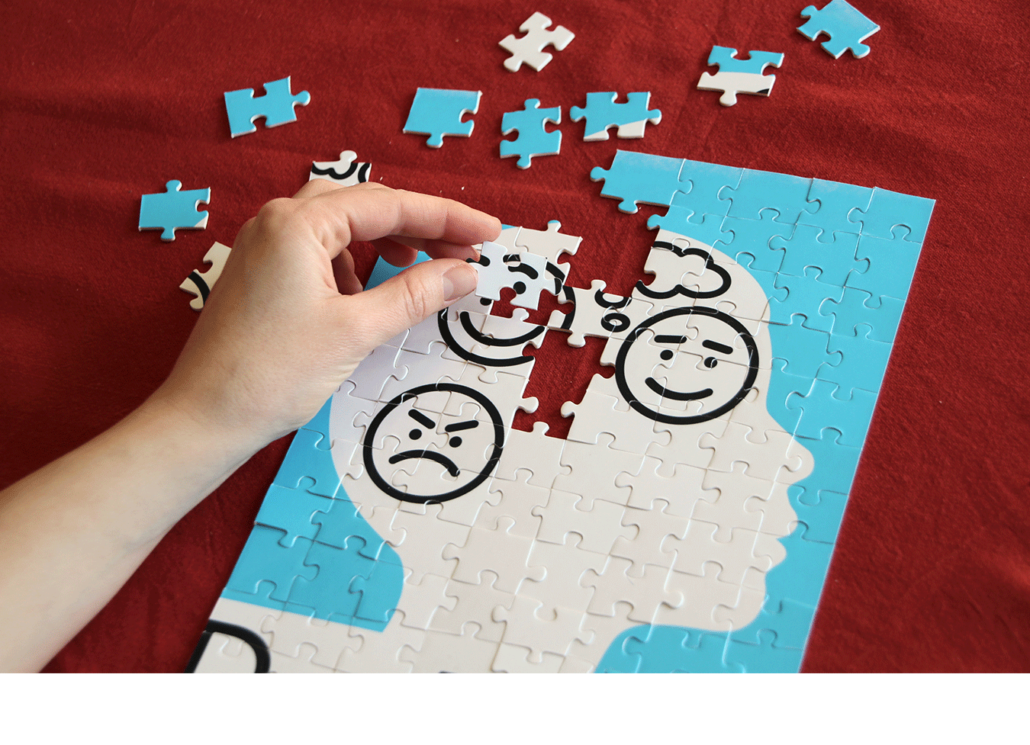 The training program THE MIND READERS promotes Theory of Mind. Theory of Mind is an ability which allows children to understand that others hold various mental states such as beliefs, desires, or emotions and to explain and predict the actions of both themselves and others. Theory of Mind is important for successful social behaviours and interactions.

What is Theory of Mind?

Theory of Mind describes the competence to reflect on one’s own thoughts and feelings as well as on the thoughts and feelings of other people. This includes understanding that one’s own knowledge, desires, beliefs, and emotions can differ from those of others and to refer to these mental states in order to explain, predict and adjust the behaviour of both themselves and others.

Theory of Mind, the ability to recognize and to reflect the mental and emotional lives of both one’s own self and also of others, is a precondition for social competence and efficacy.

Someone who has developed Theory of Mind,

Example: A child knows that people can think of something nice, wish for a special present for their birthday or plan a holiday trip.

Example: A child understands that her/his best friend is thinking about tomorrow’s maths exam and is worried about whether she/he has studied enough for it.

Example: A child recognizes from the tired expression on her/his friend’s face that she/he is not feeling well today. The child understands that this is why she/he does not feel like playing today.

Acquisition of Theory of Mind

Children acquire Theory of Mind in different stages regularly between 3 – 9 years of age. After the age of 4-5 years they are able to recognize false beliefs.

According to Peterson, Wellman and Liu (2005), Theory of Mind in children is a developmental process following different stages. 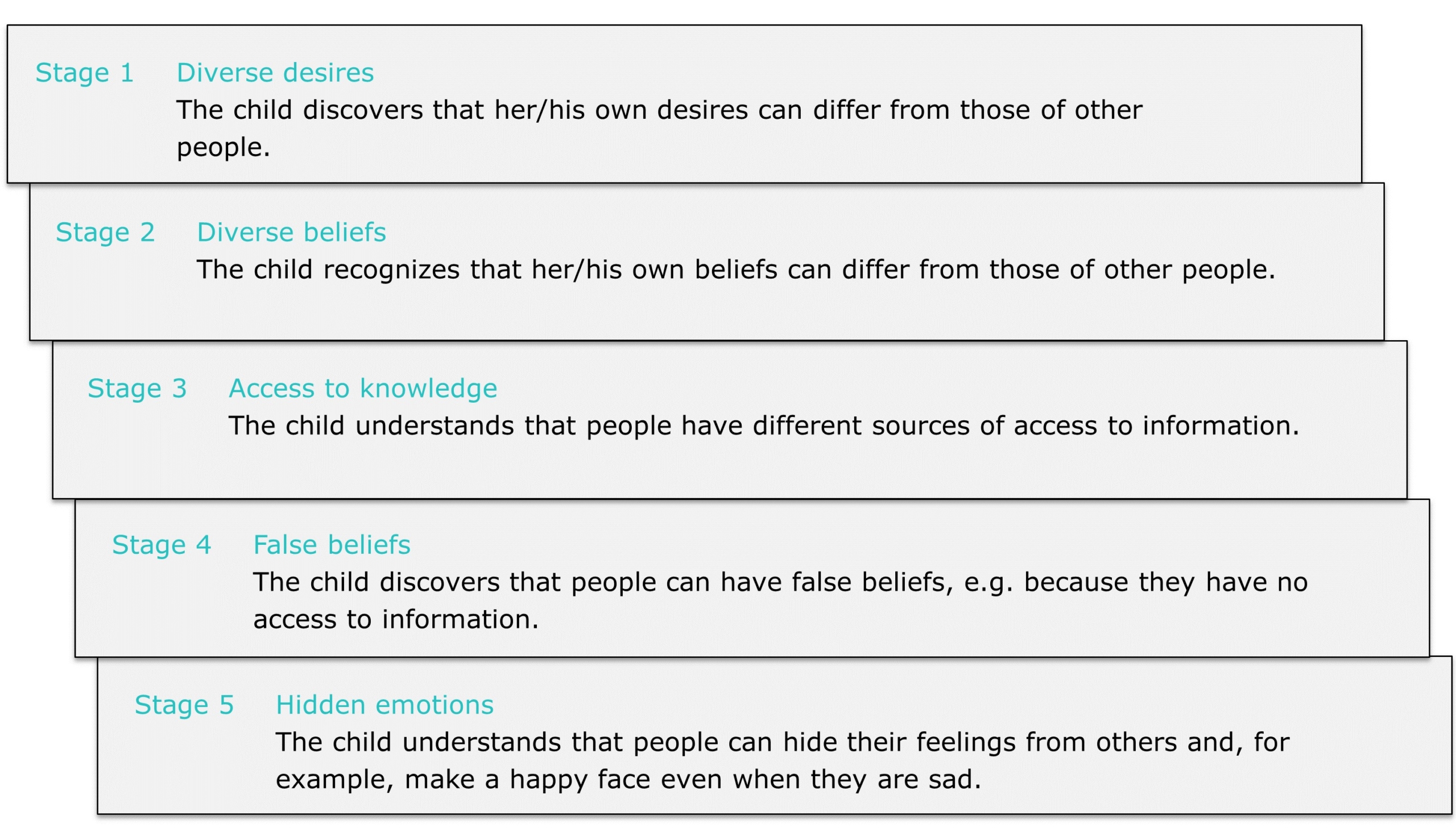 What is Emotion Understanding?

Someone who has developed Emotion Understanding,

Example: A child recognizes from her/his teacher’s facial expressions and body posture that she/he is very angry. She/he masters the words/signs “getting angry” and “furious“.

Example: A child recognizes from the happy expression on her/his mother’s face that she is happy about the gift.

Example: A child realises that although her/his friend is laughing happily about the hole in her/his trousers, she/he is actually terribly embarrassed.

Example: A child understands that her/his grandfather is looking forward to the holiday trip, but is also sad that he will not be able to see his grandchildren for a long time.

Example: A child knows different strategies to calm herself/himself down when she/she is very angry. She/he may decide, e.g., to go out to play with the ball for a little while or to talk about it with her7his friend.

The training program THE MIND READERS promotes Theory of Mind and is strictly theory-based, linking to the developmental steps of Theory of Mind and Emotion Understanding according to Peterson, Wellmann & Liu (2005) and Pons, Harris, & de Rosnay (2004).

The individual developmental steps are trained in nine different modules.

The development of Theory of Mind is closely linked to language acquisition. Therefore, the corresponding language skills in spoken and sign languages are trained in another module (“Language”). 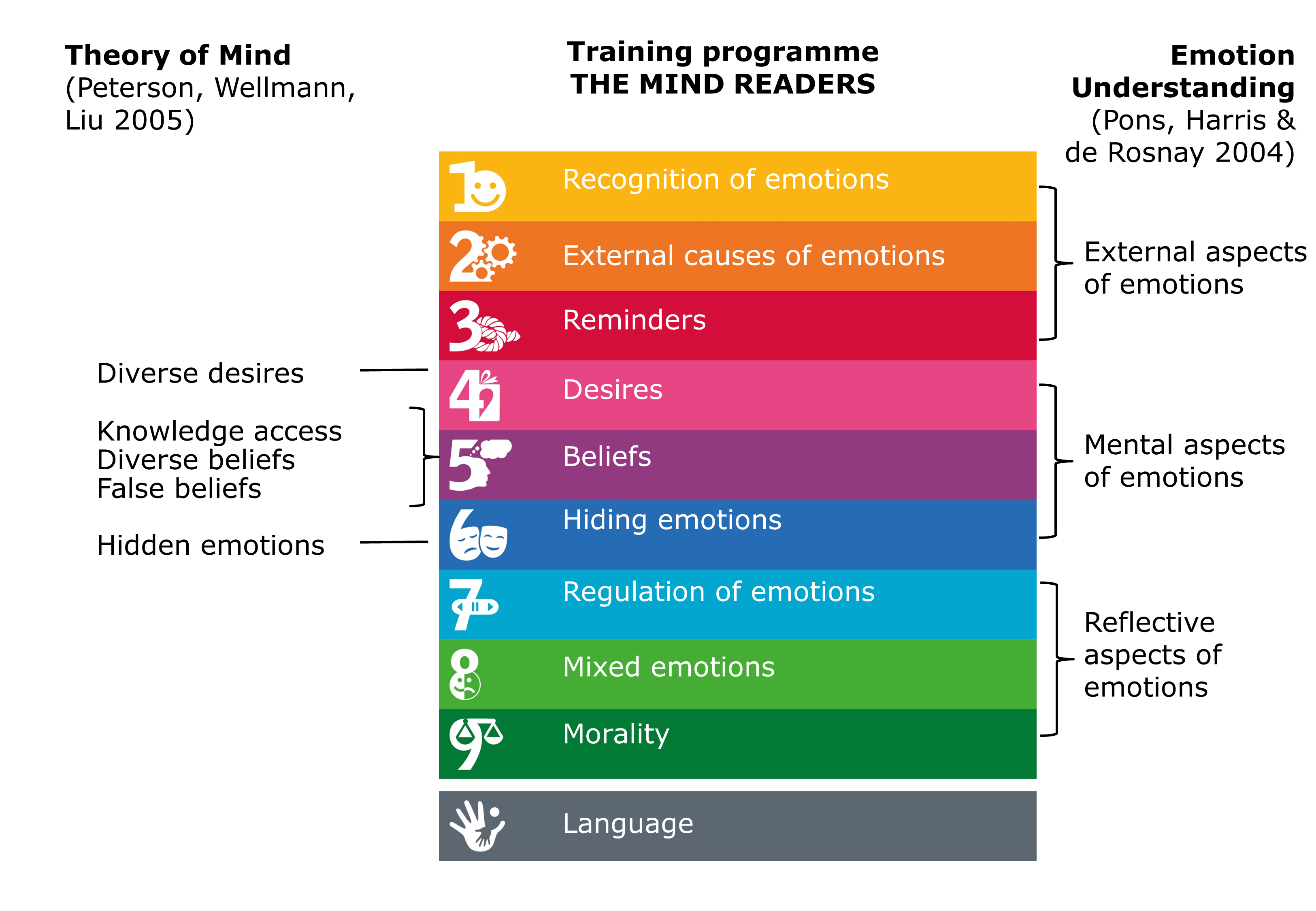 Here you can find further publications on Theory of Mind and Emotion Understanding: Publication list.